Saturday was…a productive day of sorts. Mostly because I was either trying to finish things before the snow…or during. Will back up a bit to explain.

The local news reported that for today, the Washington DC metro area was going to be hit with snow. The original report said snow would appear in the afternoon, then switch to a freezing rain/wintry mix of sorts. Given how crazy the drivers around here tend to behave at the presence of ANY precipitation on the roads, I knew whatever errands needed to be done….it had to be completed before the snow struck.

So early Saturday morning, BK and I loaded my car with the last of my miniature stash and made our way south to where the storage facility was located. We had started to rent a storage unit this past January to help with the storage issue at the house. Though given the picture below, most of the storage unit is being occupied with my apparently large miniature collection.

I ended up moving almost all of my bins o’ crap  (that were originally stored in the master half bath) and my dollhouse kits (all of which I managed to store under the bed — on my side of course) into storage. BK managed to find a cheap IKEA table on Craigslist and placed it in the storage room so I can have a designated area to place the ones assembled. Yes, the vintage Lundy stockholm, the Sedona, and my old Winston Cottage are now in storage. Even the CC I had to make the difficult choice of moving. At least until I can finish the other stuff. Like cutting up more bricks (insert groans of agony here).

The good news though is that as of this morning – I had officially moved what I needed to move into storage. The only mini things left in the house…are seriously the ones I have to finish. The ARC III was an exception — that’s considered part of the dining room decor, so that’ll never leave the house. Which is good — given I’m so ridiculously proud of it. 😀

After the storage run was completed, we took a detour at our local IKEA before we really hustled back home. At this point, the snow started to fall…and honestly, the drive home was a little bit hairy, given that even the major highways weren’t fully treated at this point. Luckily, by the time we got home and settled in, the snow was falling fast and hard.

Once we were fully settled in (and BK made us some hot cocoa to enjoy), I padded over to the dining room and hunkered down. To at least start on what will soon be Copeland the Wonder Piano’s new residence. 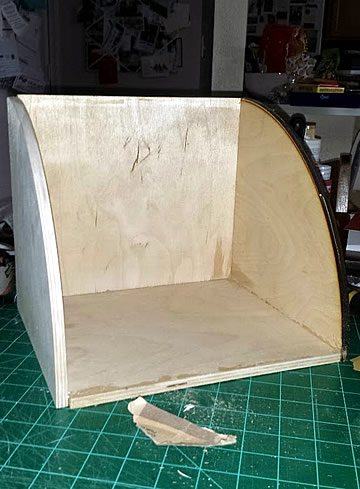 No, this isn’t a breadbox…

While this appears at first glance like a breadbox, it’s actually a corner roombox I purchased from eBay awhile back. I had forgotten about it until I started pulling my supplies out to be stored in plastic bins. It was a good size…and it gave me an idea on how I wanted to display Copeland.

For starters, I applied a thin layer of paint on the interior walls/floor. Then sanded it down once everything dried to create a smooth finish.

After the walls were sanded and wiped down with tack cloth (crud, I’ll need to get more once the snow clears), I started to install flooring. As usual, I pulled out my wood edge veneer bands. Though instead of picking one veneer and installing them as planks…thought I’d try something different. I put the walnut bands (from the ARC II) as a border, then installed the sapele bands (the ones I used in the ARC III). The wood was then sanded and wiped clean before a thick smear of beeswax polish was applied. 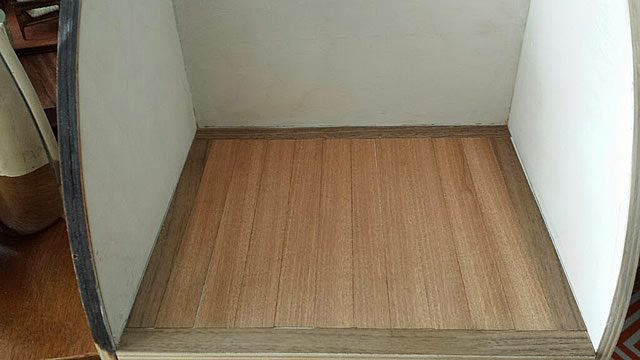 The floors installed and sanded and wiped clean.

The floor after it got waxed. Sorry for the fuzzy pics.

With the flooring done, I started on the walls. Because the roombox was relatively small  (and because majority of my wallpapers are in storage), I ended up using scrapbook paper. Not sure why, but I wanted the display to have a bit of a nautical/vintage vibe to it.

Wallpaper isn’t my strong suit (along with most things), but I try to follow some basic rules. For starters, when measuring the size needed to paper the rear wall, I always add an extra 1/2 inch to the overall length. Once the paper is cut, I measure a 1/4 inch border on the left & right side paper and fold it. Basically make the flaps to extend past where the rear and side walls meet. That way, the seam between the walls doesn’t look too obvious.

Cutting the paper to fit the rear wall.

Once the rear wall is installed, the side papers were applied. Because the walls were curved, I just measured and cut two 8.5 x 8.5 inch squares and pasted them directly to the wall. Then I cut along the curve of the walls using a sharp X-Acto knife.

The side walls cut to size. Not bad!

Unfortunately, I realized I made a mistake once the walls were installed. It occured to me that I should have done the exterior first. Cad-nabbit!!!! <starts to curse profusely and wave her arms in the air> Ugh, and I was in a groove and stuff! <curses some more>

Then came mistake #2: I guess in my panic about not doing the exterior first….I started to install egg carton bricks. Oh sweet lordie, what the heck is wrong is me??? What other fudge up am I gonna do next???

I decided before further hell breaks loose, I’d only do about 9 rows of bricks on each side, then maybe paint the rest of the sides and install some wood trim. Ugh, am so darn mad at myself! For now though, I need to paint the bricks, seal, let it dry, then spray the surfaces with Lyson before the mortar can be installed later tonight. <sigh>

Ugh. Note to self: do only the mortar tonight. And then bed. Starting to turn into a Cranky McCrankster. 😦

2 thoughts on “Making Strides – Then an ARGH! Moment”